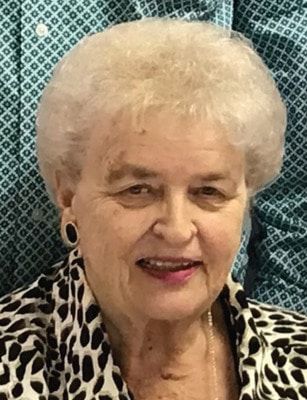 Trellis Sue Harrington, 83 of Seymour passed away Saturday, January 8th 2022 at United Regional Hospital in Wichita Falls, Texas. Visitation was from 6:00 until 8:00 p.m., Monday, January 10, 2022 at Seymour Memorial Funeral Home. Services were held on Tuesday, January 11, 2022 at the First Baptist Church in Seymour with Dr. David Warren officiating. Burial was at Riverview cemetery, under the direction of Seymour Memorial Funeral Home. Trellis was born in Seymour, Texas on December 8, 1938 to J.E. and Rada Holman. After graduating High School in 1957, she married Donnie Harrington of Throckmorton, Texas on June 27, 1959. Donnie and Trellis were married 62 years. Trellis was a lifelong resident of Seymour. In 1958, Trellis began working for Seymour ISD as the High School secretary. After almost 15 years of service with the school, she started her family and became a homemaker. After her kids were grown, she returned to work for a short time at Seymour Hospital, working in the business office. Trellis was a very active member of First Baptist Church. She was the oldest living continuous member of FBC for 71 years. She was involved in WMU for many years, worked in the nursery for 15 years, taught Vacation Bible School for 15 years, and taught Mission Friends on Wednesday nights for 20 years. She also served on various committees within the church throughout the years. Trellis was a 58 year member of the Seymour Extension Homemakers Club, serving as President many of those years. She served on the TEEA council board and was a TEEA council delegate for many years. Other areas of service include PTA, American Cancer Society, Relay for Life, Meals on Wheels and served as a Seymour ISD school board member for 2 terms. Though Trellis was very involved in her church and community, she was also the wife of a farmer and rancher during those 62 years of marriage. She managed the finances and was the sole bookkeeper of the farming and ranching operations and the many other business endeavors her husband and son took on. Many evenings she could be found in the kitchen, cooking up a meal to deliver to her husband and son, out in the field during those busy seasons of wheat harvest and late nights of plowing. She was a devoted wife, mother, grandmother and daughter. Trellis is survived by her husband of 62 years, Donnie Harrington, daughter, Suzanne Shumate, Beloved granddaughter, Breanna Shumate, and daughter-in-law, Shalay Harrington, all of Seymour. She is also survived by her three sisters, Linda Winn and husband Wayne “Breezy” of Seymour, Barbara Wright and husband Joe Pat of Seymour, Brenda Lankford of Wichita Falls and many loving nieces and nephews. Trellis is preceded in death by her son Kelley Harrington, her parents, J.E. and Rada Holman and brother, Johnny Holman. The family suggests memorials be made to First Baptist Church of Seymour. Services were under the direction of Seymour Memorial Funeral Home.