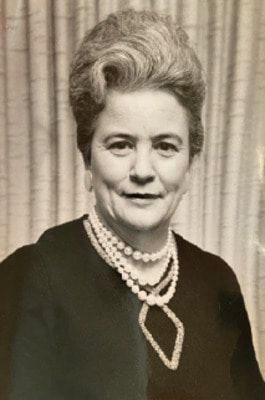 Opal Grimland went to be with her Lord and Savior January 17, 2022, at the age of 102. She was a resident of Mulberry Manor, Stephenville, Texas at the time of her death. Opal was born in Woodson, Texas on December 12, 1919, she was one of 14 children born to James Keaton and Dilla Shaw Wright. Opal was a graduate of Woodson High School. She was married to John Dewey Belcher in 1942 in Stephenville, Texas. Following Dewey’s death in 1974, she married Yern Grimland in Hawaii in 1975. Opal worked at several jobs during her lifetime. She served as a bookkeeper for her husband Dewey’s service station (Humble and Gulf Oil Companies) for 35+ years. Following Dewey’s death in 1974, she took over the Gulf Oil distributorship and was selected to be the first female distributor in the United States. She was also involved in businesses in Stephenville, including selling Mary Kay Cosmetics, she owned and ran Mode O Day dress shop, and was a distributor for Happy Feet Shoes located in Corona, California. She and her second husband, Yern Grimland, built, owned and operated Shady Oaks Mobile Home Park in Stephenville, Texas. Early in her career she trained to be a nurse and worked for Dr. Tom Gordon in Stephenville. She later worked as an aide at the Stephenville Nursing Home at the age of 88; she also worked at Home Sweet Home Assisted Living as an in-home aide until her mid 90’s. On Opal’s 100th birthday, she received certificates in her honor from the Governor of Texas, Greg Abbott, and the President of the United States, Donald Trump. Opal was active in many community services in Stephenville. She served as chairman of the Stephenville Heart Fund, serving one term as president. She was a charter member of Zonta Club International, serving one term as president. She was a member of the first Senior Citizens Board of Directors, PTA president, a member of Beta Sigma Phi Sorority, and she was a member of the First Baptist Church. Survivors include a daughter, Wynnell (Mike) Sullivan of Blackville, South Carolina; and a son, John Dewey Belcher, Jr. of Stephenville, Texas; a stepdaughter, Priscilla (Vic) Ashe of Stephenville, Texas; 7 grandchildren, Carl Sullivan, of New York City, New York, Dewey Sullivan, of Blackville, South Carolina, Charles (Virginia) Sullivan, of Honea Path, South Carolina, Joe Belcher of Stephenville, Texas, David Belcher of Stephenville, Texas, Austin Ashe of Stephenville, Texas, and Serena Rivera of Stephenville, Texas; brother, Wayland (Joan) Wright of Stephenville, Texas; 2 sisters, Betty Jo Hearn and Ruby Nell Walker of Munday, Texas; and numerous nieces and nephews. She was preceded in death by husbands, Dewey Belcher and Yern Grimland, and son, Joe David Belcher. The family wishes to express their gratitude and thanks to the staff of Mulberry Manor. In lieu of flowers, memorials may be made to the First Baptist Church in Stephenville, Texas.